Choose one of our suggested tours in a YUGO – we will drive you and guide you, all you are left with is having FUN!

Let us tailor a Yugo adventure JUST FOR YOU!

For people living in Ex-Yugoslavia the one and only Yugo was never just a car, it was both a member of a family and a best friend. First Yugo was introduced to Tito, Yugoslav leader, in 1978, and even though allegedly Tito was not impressed with it, the production of that legendary car reached the number of 784.428. Yugos were being asembled in Zastava factory in Kragujevac between early 80’s and 2008. Everybody drove a Yugo and it was even exported to many countries – from the Great Britain to the USA becoming the cheapest new car money could buy. However.. 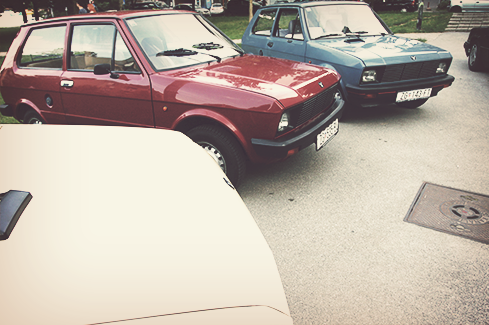 How did Zagreb cope with the Covid-19 pandemic and how can hospitals be fun, spooky and photogenic?

How did Zagreb cope with the Covid-19 pandemic and how can hospitals be fun, spooky and photogenic?

The first Covid-19 patient in Croatia was registered in the city of Zagreb on February 25th 2020. It was a young gentleman who, as a real Croat, enjoyed a good UEFA Champions League football match (yes, yes – we know, it’s soccer in some countries) between Atalanta and Valencia in Milan, and, as many others, […]

As you already know, tourism has been hit hard with the current pandemic. Luckily, virus can’t be transmitted to our YUGOs – they are safe and sound in the garage following #stayathome instructions! Regarding confirmed reservations; all tours booked in 2020 can receive a full refund or change dates for 2021 free of charge! In […]

Drive, explore, reconnect, experience Croatia and feel Slovenia in an old VW camper van after taking a joy ride in our Yugo! All of our Balkan Campers & Yugo enthusiasts will get a special back-to-the-80’s gift! https://balkancampers.com/ […]

Read more
We use cookies to ensure that we give you the best experience on our website. If you continue to use this site we will assume that you are happy with it. Read moreOk