During the biggest virus pandemic in the last 100 years, in a small European country, the worst case scenario happened – all bars closed for the first time in history! People were shocked, wondering around empty streets finding only doors with hanging “CLOSED” signs. What to do? Where to go? WhatsApp collapsed because of 20-year-olds texting their parents asking for instructions on how to cook Turkish coffee at home and Google burned out after the billionth question of all questions: “who delivers cheap beer near me?”. People thought – that’s it! It’s the end of the world as we know it! Friends met on Zoom on a warm Spring night, discussing conspiracy theories and went to sleep around midnight expecting their Groundhog day to continue the next morning. Little did they know that the following morning would be like no other. At 6:24 am the strongest earthquake in the last 140 years (5.5 Richter scale) woke them up. Everybody ran out in their PJ’s (and some without) only to freeze in an unexpected snow blizzard! Confused citizens wondered – where is it safe? Indoors? But aftershock might happen! Outdoors? But on TV the Government said we should #stayhome! The conclusion was: where’s a good (or bad, because at this point no one cared) RAKIJA (grappa) when you need one?!

If this was a movie, we would probably roll our eyes saying Hollywood is not what it used to be and how screenwriters lost their mojo.

However, in our reality called “The Spring of 2020”, on March 22nd in the City of Zagreb, this is exactly what happened. The lock-down was a lucky coincidence – since we all respected #stayhome rule (and upgraded it with #sleeplate rule) there was hardly anyone out walking under the collapsing buildings. This 2020 earthquake was the strongest one after The Great Earthquake of 1880 that woke our great-grandparents up and caused the biggest renovation of our beloved city. In both earthquakes, the building that suffered the most and became the symbol of Zagreb’s shaking ground is our most iconic building – The Cathedral.

Up to this point we had 3 cathedrals built at the same spot, historic hill of Kaptol. About our first Cathedral we don’t have a lot of info. We know that it took us more than a century to build it and it took the Tatar (Mongolian) raids of mid-13th century much less time to destroy. After that we built a new one, bigger, better and safer. The second Cathedral was a bit chubby, Gothic and Romanesque style, but not strengthened enough and was almost completely destroyed in The Great Earthquake of 1880.

After that earthquake, a known German architect, Herman Bollé, accepted the challenge to build a new cathedral and to include in it whatever was left from the old one. When you come to Zagreb (#mustvisit #zagreblovesyou #yugocitytour), on every step your will hear about the work of Bollé – from the famous roof, the fountain, the facades of many churches to the grandiose cemetery. He was a real celebrity of the turn of the century and still today praised and the builder of our city.

We still like him, even though, we have spent the last 30 years renovating his masterpiece. The Cathedral was made out of sandstone on top of the hill, exposed to all kinds of harsh weather conditions: from snow and rain to the well-known Northern wind that is able to freeze your bones and blow off the Neo Gothic facade ornaments. After 30 years of watching the scaffolding being moved from one side of the building to the other, and just as we thought – That’s it, we’ll finally see it finished – BAM! The earthquake of 2020 woke us up, chopped off the south tower, dislocated the north one, smashed parts of the interior and forced us to renovate it yet again.

The Zagreb Cathedral of Blessed Virgin Mary (a.k.a. St Stephan’s Cathedral) is still severely damaged. The tips of both towers (one was chopped off in the earthquake, the other one we had to remove because it almost collapsed afterwards) were replaced with big crosses. The stained glass windows (a few of them survived even the 1880 earthquake), frescoes (some are from the 13th century), sculptures, the crypt and the biggest Croatian organ with 6600 pipes are all damaged, but not destroyed, and can be restored over time. Even the legendary Las Vegas chandeliers (yep, they went from illuminating a real casino in Las Vegas, USA, to illuminating the biggest cathedral in Croatia) are still in one piece hanging from the ceiling and waiting for holy masses to start. 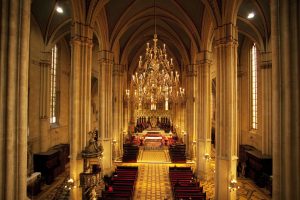 Today, almost 3 months after the earthquake, and a month since the epidemic lock-down started to relax, we can say life in our city started to feel as usual. We’re working, having fun, discussing politics while drinking coffee in our cafes, finding cheap beer without the assistance of modern technology, and, of course, we are yet again renovating our cathedral. Life goes on, we’ll renovate whatever needs to be renovated, we’ll build it bigger, better, safer and even older if we have to. As citizens of Zagreb we are again proud to say: Our Zagreb always was and always will be an Unconquered City!

Now, dear Hollywood, it’s your turn – The City is ready, and our Yugo’s are already looking forward to their supporting roles!

*photo of the interior is owned by Zagreb Tourist Board (Author M:Gašparević) and used in this blog post with the Board permission.